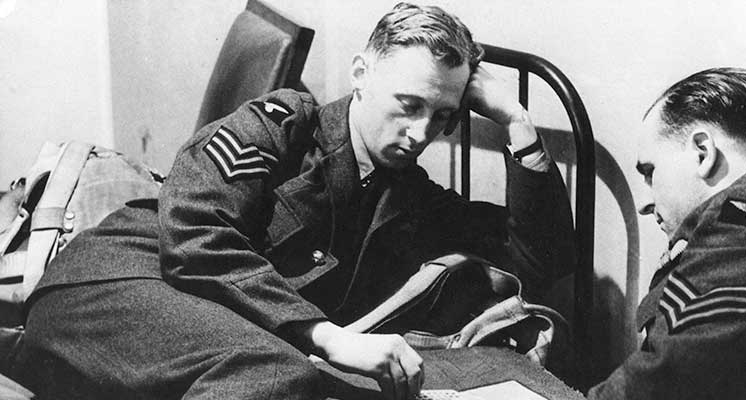 John, know as “Johnnie”, was born at Black Heath in 1915 and educated at Dulwich College. His father worked for the Tata iron and steel company in India, Johnnie worked for Stewarts and Lloyds at Glasgow and then Corby. Johnnie joined the RAFVR in 1937, he was then called to full-time service at the outbreak of war and was with 66 Squadron in June 1940.

On July 10 he shared in the destruction of a Dornier Do 17 and during September he shared a Heinkel He111. Johnnie was shot down in combat over the Thames estuary on 18th September, he baled out unhurt. His Spitfire R6925, is believed to have crashed at Coldred. On 27th October, 1940, Johnnie took off from Gravesend to patrol the Maidstone area at 8.05am, at around 8.30am he broke formation and went into a near vertical dive, his commanding officer P.O. H. R. Allen saw him break formation. He followed him down, shouting down the RT first his Christian name, "pull out Johnnie, for Christ’s sake pull out". He then used his surname, "Mather pull out", by this time the ground was getting very close, too close for comfort, P.O. Allen had to pull out of the dive, as he climbed away he looked back and to his horror, he saw Johnnie’s Spitfire P7539 hit the ground and exploded. We can now be 95% sure Pilot Officer Johnnie Mather was shot down in defence of London, and not Anoxia.

Many people in the Village, including my Mum and Dad, heard gunfire. Many years ago I worked with Ernie Killick who was the village milk man in 1940, this is what he told me about the Hildenborough Spitfire crash. He was doing his deliveries in Stocks Green Road at about 8.30am on Sunday 27th October, 1940, it was an overcast morning, everything was still and very quiet. "As I pulled up to do my next delivery, I could hear the muffled sound of aeroplane engines in the distance, they got closer and closer, then suddenly, I heard a sharp burst of gunfire, just the one burst, that was it, then the immense roar of what I know now was the Spitfires Rolls Royce Merlin engine, for a few seconds I could see nothing in the sky only thick cloud, then I could see an RAF fighter had broken through the cloud traveling at very high speed, absolutely vertical, bits were breaking off it as it went down, I could see another RAF fighter circling, following him down. Then there was an enormous crash as the Spitfire hit the ground, followed by absolute silence."

In 1972 I was given permission to recover the remains of Spitfire P7539 from what used to be in 1940 the Half Moon public house garden. We recovered a smashed Rolls Royce Merlin engine, two Supermarine rudder pedals, the engine starter motor and various other aircraft parts. This was my first aircraft recovery and started the Tonbridge Battle of Britain Museum story.