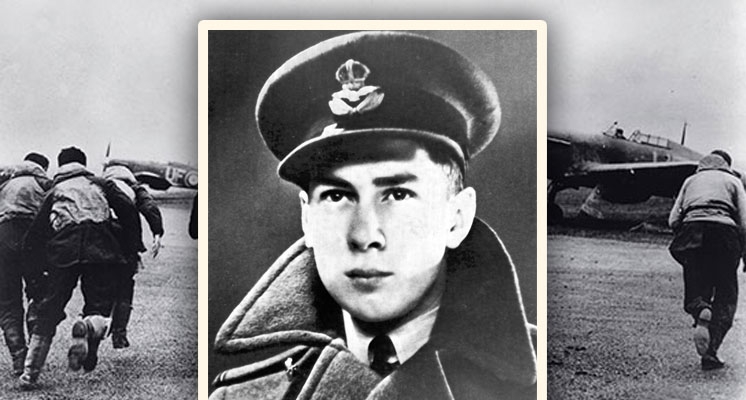 Pilot Officer Ramsay, of Lilliput, Dorset, joined the RAF on a short service commission in July 1938. The squadron moved to France on 23rd January, 1940 and then joined 151 Squadron at North Weald on 29th July 1940. P/O Ramsay failed to return from an engagement with enemy fighters over Chelmsford on 18 August 1940, in Hurricane R 4181, and was reported MISSING (the hardest day of the battle).

On a lovely summers day in August 1983 the same enthusiastic group and myself turned up at Deal Hall Farm, Holiwell Point, Essex, we all had one thing in common to get this young pilot identified so he is no longer missing, no known grave and finally to get him buried with full military honours at Brookwood military cemetery.

Our task on that day in August 1983 (and everyone knew what he had to do), was to positively identify the pilot or aircraft, in other words we need to find the aircraft makers plate with aircraft number, or the pilots personal effects with his name and number. The M.O.D. would not co-operate with us at all, it was the M.O.D we had to convince, so we had to positively identify this aircraft, or we would get a reprimand from the M.O.D. Fortunately for us and this young pilot we found everything we needed, the aircraft number on makers plate, pilots name on clothing and so on. When we finished that day we phoned the police and reported finding human remains, within five minutes we heard the sirens and then the police cars tearing across the field in a cloud of dust, it was like a scene from the Sweeney.

Sadly amongst the wreckage was a solid gold signet ring, it was inscribed B.J.R on his 21st birthday from his mother and father, this was two days before he went missing. I handed the ring in to the police and the final chapter in this mystery, was on 25th October, 1983 at Brookwood Military Cemetery, the 21-year-old Pilot Officer B. J. Ramsay, was buried with full military honours. God bless this young Lad.